The guy that likes drinking alcohol and wearing a dress

His love of a good frock and brew began in the English town of Leeds. While other boys and girls were out playing cards or tic tac toe, master Whittle was spending time sewing in the basement of his detached and modern Leeds settlement. A small village, word quickly spread of his interest in David Bowie and Elton John. In honesty, this wasn’t so bad, but very soon things took a sinister turn.

As many budding serial killers begin their sick, twisted ways carving up innocent animals, neighbours were shocked when they started noticing small birds and squirrels in tiny dresses. Some dismissed these as a ‘pranksters jibe’. But for Myke, it was the beginning of a perverse existence, full of dresses, wine, and sexual frustration.

His younger years were lonesome but as he grew, he learned to better integrate with the crowd. He learned how to hide himself in plain sight. He started traveling. To foreigners, animals in dresses were a novelty, perhaps even a cute viral video to be filmed. But they were not aware of the dangers that had befitted them. A demon-child was fledgling in their very midst.

The very final time Myke was spotted was in the town of Bristol. Stunned locals photographed the young man of 18 passed out drunk with 6 bottles of empty wine (apparently from a mobile wine subscription) next to a cross-dressing horse with a cigarette. The picture was published and Myke Whittle was shamed. His reputation in tatters, he fled the continent to the land of the convicts – Australia. Surely he could fit in there. 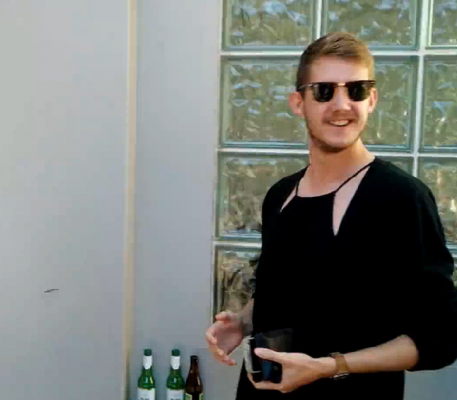 In this is where we’ve found ourselves. Mychal Whittle (pictured) working in a corporate environment in Australia. Now instead of frocking animals, he frocks himself. Locals call him ‘progressive’ and ‘brave’, and not ‘sinister’ and ‘just a bit weird’. The Northerner has found acceptance in a social setting that celebrates his difference.

Nowadays you’ll find Myke drunk in Strawberry Hills, his hairy calves calling both ladies and gents for a brew or two.

And that’s just the way he likes it.