Famously known as the man who put the word ‘festy’ into ‘festival’, Sam Ficek has emerged as the new well-prepared English twat to make a name for himself in the popular trance scene of Sydney. 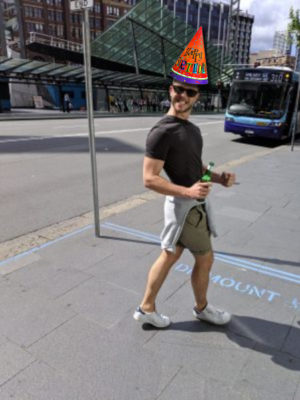 His assault on Australian shores began a little over a year ago.
Embarking from his shitty, cold hometown in the 45 km north west of London, Sam was seeking a new challenge. He’d conquered pale, ugly, ginger lasses; England’s female staple, but was seeking a greater variety of ladies. A variety that only a world-famous international city like Sydney could provide.
‘I was a king amongst men back in England’, Sam reminisces, as I sit down with him at one of his favourite local pubs.
The man himself is deceptively short, hairy and weird-looking. But somehow he finds a way to make it work.
‘A king mate. A legend’.
‘You gotta get ‘em when they're leaving the bathroom (at the festivals). That’s why I wait outside the portaloos. Instant access.’, he philosophises.
‘Reminds me of the caravan club back in England. I got so much action I could barely walk’, he starts with a smile on his face.
‘Don’t worry they got it much worse’, he chuckles confidently.
‘A legend mate. A king.’
We talk for some time about his arrival to Australia, his first thoughts and his adaptation to the local market.
‘The market may change, but the secret remains the same’, he muses. ‘Always come prepared mate… well-prepared’.
And that’s where we leave it.
As I leave the pub, and Sam retreats with the scantily-clad mangirl into their quarters. I’m left amazed with the encyclopaedia of information of strategies and tactics that he’s provided to me.
He taught me pick up one-liners, the best hail-mary lines for when there’s 1 hot chick in a dorm with 4 dudes, and his best and bravest methods to pick up chicks at festies.
I’m left feeling perplexed, but ultimately awe-struck at the wealth of knowledge this 5ft 2, slightly-slow Englishman has provided me.
Baffled but respectful with his final words, I offer the following:
Samuel is the new chip on the old block.